Housing Market is Playing Leading Role in the Turnaround

As the economy recovers from this year’s health crisis, the housing market is playing a leading role in the turnaround. It’s safe to say that what we call “home” is taking on a new meaning, causing many of us to consider buying or selling sooner rather than later. Housing, therefore, has thrived in an otherwise down year.

Today’s high buyer demand combined with low housing inventory means we’re seeing home prices appreciate at an above-average pace. This demand is being driven by those who want to take advantage of historically low mortgage rates. According to Freddie Mac:

“The record low mortgage rate environment is providing tangible support to the economy at a critical time, as housing continues to propel growth.”

These factors are driving a positive impact on the economy as a whole. According to the National Association of Realtors (NAR), the real estate industry provided $3.7 billion dollars of economic impact to the country last year. To break it down, in 2019, the average newly constructed home contributed just over $88,000 per build to local economies. Across the country, real estate clearly makes a significant impact.

In addition, last week, the Bureau of Economic Analysis announced the U.S. Gross Domestic Product increased at an annual rate of 33.1% in the 3rd quarter of this year, after decreasing by 31.4% in the second quarter. There’s no doubt the growing economy is being fueled in part by the soaring housing market. Experts forecast this housing growth to carry into 2021, continuing to make a big impact on the economy next year as well.

The American Dream of homeownership has continued to thrive in the midst of this year’s economic downturn, and “home” has taken on a new meaning for many of us during this time.  Best of all, the housing market is making a significant impact as the economy recovers.

As we enter the final months of 2020 and continue to work through the challenges this year has brought, some of us wonder what impact continued economic uncertainty could have on home prices. Looking at the big picture, the rules of supply and demand will give us the clearest idea of what is to come.

Due to the undersupply of homes on the market today, there’s upward pressure on prices. Consider simple economics: when there is high demand for an item and a low supply of it, consumers are willing to pay more for that item. That’s what’s happening in today’s real estate market. The housing supply shortage is also resulting in bidding wars, which will also drive price points higher in the home sale process.

There’s no evidence that buyer demand will wane. As a result, experts project price appreciation will continue over the next twelve months. Here’s a graph of the major forecasts released in the last 60 days: 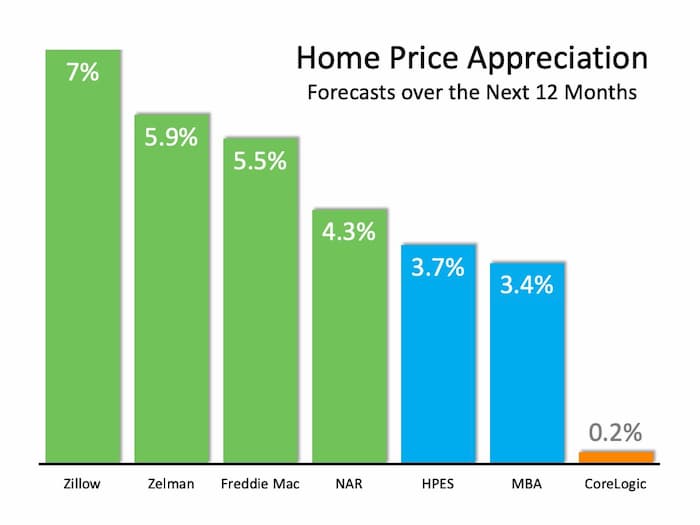 I hear many foreclosures might be coming to the market soon. Won’t that drive prices down?

Some are concerned that homeowners who entered a mortgage forbearance plan might face foreclosure once their plan ends. However, when you analyze the data on those in forbearance, it’s clear the actual level of risk is quite low.

Ivy Zelman, CEO of Zelman & Associates and a highly-regarded expert in housing and housing-related industries, was very firm in a podcast last week:

“The likelihood of us having a foreclosure crisis again is about zero percent.”

With demand high, supply low, and little risk of a foreclosure crisis, home prices will continue to appreciate.

Originally, many thought home prices would depreciate in 2020 due to the economic slowdown from the coronavirus. Instead, prices appreciated substantially. Over the next year, we will likely see home values rise even higher given the continued lack of inventory of homes for sale.